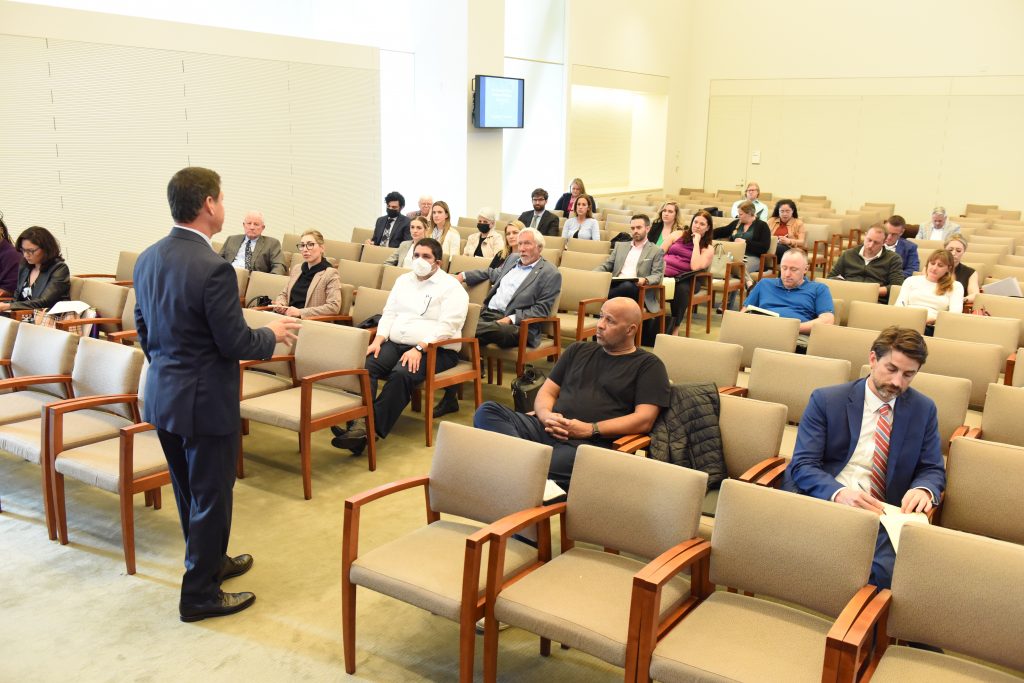 Admission of demonstrative exhibits into evidence is a critical skill for trial lawyers. Demonstrative exhibits, such as a photograph, map, diagram, model, anatomical drawing or organizational chart, help a juror visualize the testimony of a witness and lock the image into the juror’s mind.  This is an important step in educating the jurors about your case and persuading them as they can “see” the truth of what you and the witnesses are telling them.

Demonstrative Evidence Can Be Informational and Emotional:

Demonstrative evidence can be informational: a diagram of a collision scene will help jurors visualize the streets, directions, traffic devices, lanes and distances discussed by the witnesses. An organizational chart will assist in understanding the chain of command at a company. A map can put the site of the event in geographical context or can show a route of travel important to understanding times and distances. An anatomical drawing can simplify complex medical testimony and demonstrate the nature and extent of an injury. Since many jurors are visual learners, demonstrative evidence is their preferred and most efficient way of learning.

Demonstrative exhibits can also have an equally important emotional impact on jurors. A photograph of the kidnapped and murdered child will give the jurors a sense of the innocence and vulnerability of the victim. A deceased husband’s handwritten Valentine’s Day card to his surviving spouse will demonstrate the love and affection of the couple in a wrongful death case. A photograph of the burn victim’s wet skin grafts may graphically corroborate the victim’s pain and suffering. Good trial lawyers understand that demonstrative exhibits, consistent with your case theme and theory, are necessary, powerful, and persuasive tools.

This article will discuss how to admit “demonstrative” exhibits into evidence. Note, the admission of “real or physical” evidence (e.g. the actual knife used in the crime, the torn blouse, the defective brake system, the counterfeit bills, the 9mm bullets), is discussed in a separate article, Exhibits: Admission of Real or Physical Evidence on this website.

Admissibility Requires Both Relevance and Authentication:

At the outset, it is important to remember that any exhibit to be admitted into evidence must be relevant and authenticated. EC §350 states: “No evidence is admissible except relevant evidence.” EC §1401(a) provides: “Authentication of a writing is required before it may be received in evidence.” EC §250 broadly defines a “writing” to cover demonstrative evidence. Per EC §250, a “Writing” means handwriting, typewriting, printing, photostating, photographing, photocopying, transmitting by electronic mail or facsimile, and every other means of recording upon any tangible thing, any form of communication or representation, including letters, words, pictures, sounds, or symbols….” Authentication requires that the proponent of the evidence show that the evidence is genuine, i.e. it is what it purports to be.

Laying a Foundation for Demonstrative Evidence:

The process by which the proponent of the evidence shows the demonstrative evidence is genuine is called “laying a foundation.” I will illustrate this process with a hypothetical. In a prosecution for felony vandalism, the victim’s car was damaged when the defendant spray painted profanity on the victim’s car and smashed the windshield. The prosecution seeks to introduce a photograph of the car taken by the police depicting the damage. The prosecution calls the victim (car owner) as a trial witness to authenticate the photograph. After marking the photograph, showing the photo to defense counsel and asking permission of the court to approach the witness, the prosecutor positions herself near the witness stand, without blocking the view of any of the jurors, and asks the following four questions to lay the appropriate foundation for admission of the photograph.

The Four Foundational Questions for Admission of Demonstrative Evidence:

Prosecutor: Mr. Baxter, I am now showing you a color photograph that has been marked as Court’s Exhibit #5.

Witness:               My license plate is visible in the photograph. Also, I purchased the car new and I have had it for four years and drive it every day. I know my car and that’s my car in the photo.

Question #4:       Does this photograph truly and accurately depict the damage to your car that you discovered on the morning of July 5th of last year?

The court will inquire whether the defense has any objection to admission of the photograph. If none, the exhibit will be received. If the opposition objects (a common objection is “lack of foundation”) the

court will rule on the objection. The four questions do not preclude additional questions to further illustrate the extent of the damage, but the four questions are foundational for admissibility. Without them, the evidence is objectionable and will not be admitted.

A final note of caution: if you are using digital demonstrative evidence that you intend to show on the courtroom screen to jurors or a blowup of a demonstrative exhibit, make sure you check with the court regarding when you may “publish” (show) the image to the jurors. Many courts will only allow you to publish an exhibit to the jury after it has been admitted into evidence. If you get the court’s approval (or counsel’s stipulation) you may lay the foundation while the jurors are looking at the screen or blowup and, once the foundation is laid, then move for admission.

The admission of demonstrative evidence should be part of every trial lawyer’s strategy. In planning your trial, consider what demonstrative evidence will assist in illustrating the testimony of witnesses and having an emotional impact on the jurors. Make sure you practice laying foundations until the questioning becomes familiar and comfortable. Most importantly, after laying the foundation, make sure you move the exhibit into evidence.