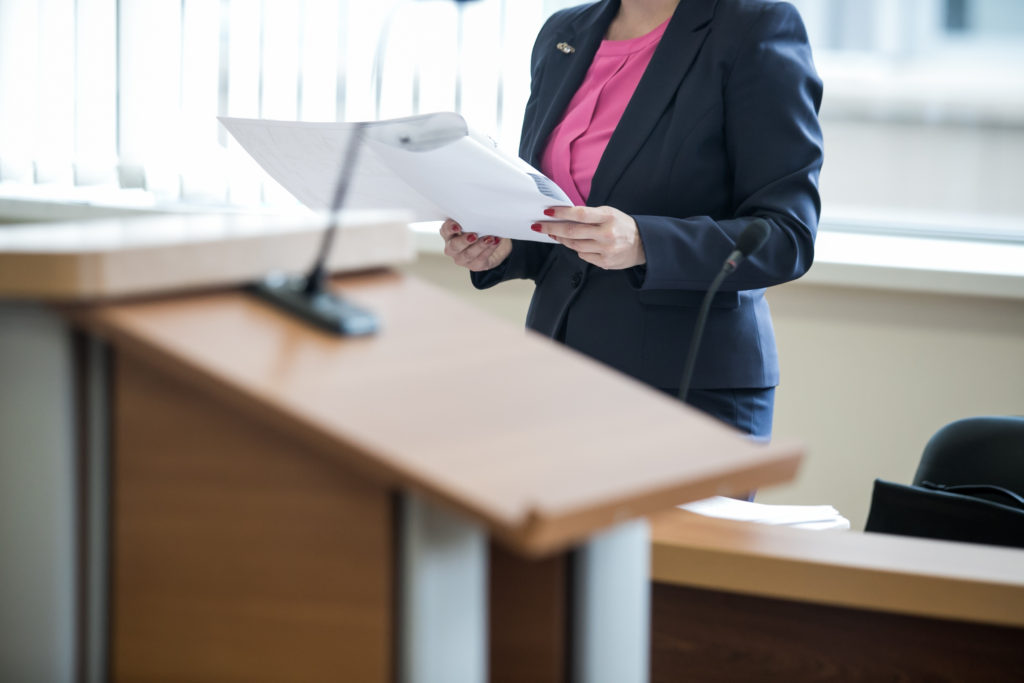 Closing Argument is the trial’s denouement. To be successful, it must be satisfying and persuasive to the jury. However, often, too often, it becomes a liability due to poor planning or execution. Your Closing Argument needs to be engaging, goal-oriented, honest, and delivered with passion and verve. To assist you, I offer the following five considerations in planning and delivering your Closing Argument:

1. Your Case Theme and Theory Must Be Featured and Amplified in Closing Argument.

Stay on message. You crafted your case theme with care. For example, “This is a case about the most basic human instinct – survival.” Your case theory factually expounds on this theme: “Bill Williams [defendant] did kill Sam Booth. But only after Williams was attacked by the larger, drunken Booth who was in a jealous rage because he wrongly believed Williams was having an affair with his wife.  Booth tried to kill Bill Williams. Williams was entitled to defend himself. He did exactly what the law allows him to do.”

You introduced your case theme/theory to the jury in Opening Statement. Make sure your Closing Argument is symmetrical and complimentary to your Opening Statement. If you are inconsistent, the jurors will be confused and mistrustful. Do not risk damage to your credibility with the jurors. Your believability is your most valuable asset.

Closing argument is not a regurgitation of the facts. You must curate the facts. Select and organize the facts so there is a concentration on the critical issues in your case. Do not give equal time to the minor or inconsequential facts as that will dilute your argument. Once you have selected the important facts, argue the facts consistently with your case theme/theory.

3. Closing Argument is a Performance with Consequences. You Must Deliver.

Do not read your Closing Argument. Step out from behind the podium and engage the jurors. Deliver your Closing Argument with confidence and conviction. Illustrate your Closing Argument with admitted exhibits such as video, photographs, diagrams, drawings, charts and other writings. Project the exhibits on the courtroom viewing screen so they are easily seen by all the jurors. Use highlighting to draw attention to significant portions of a document. Explain to the jurors the significance of what they are viewing. A winning Closing argument is an interesting, convincing story told to an audience waiting to be captivated.

4. No One Likes a Liar. Be Scrupulously Accurate with the Facts and Law.

No self-inflicted wounds. Do not let passion interfere with your duty to be truthful. If you argue facts not admitted into evidence, you will draw an objection from opposing counsel, a potential admonition from the judge, and a loss of credibility with the jury.

As to the law, the judge will have pre-instructed the jury in the law that applies to your case before Closing Argument. Any legal argument you make must be consistent with the judge’s instructions to the jury. However, simplify the law for the jurors. Focus on the elements of the crime, cause of action or defense and home in on the critical key phrase or word in the jury instructions that will decide the case.

If you are listening to your opposition’s argument, make sure that he or she is accurate with the facts and the law. Also, be aware that some attorneys use illustrative aids that are not admitted into evidence during Closing Argument. Often, these aids are props to illustrate a legal point, such as the burden of proof. [For example, you may see a drawing of the scales of justice with weights on one side to illustrate proof beyond a reasonable doubt]. Be discerning. Make sure that these props accurately reflect the law and are consistent with the judge’s instructions to the jury. If they are not, you must object, and if sustained, seek a curative instruction from the judge to the jurors to ignore the prop.

Ask for what you want. The jurors have just endured a long recitation of jury instructions from the judge and (usually) extended arguments from counsel. They are being inundated with law and facts. Make their job simpler. Tell them exactly what you would like them to do. Review the Jury Verdict form with them to clear up any confusion. Your job is to make the complicated simple and understandable. The jurors will be grateful for the help.